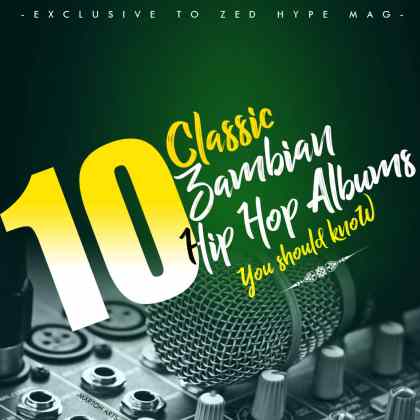 This masterpiece dropped in 2005 and officially became the first commercial Zambian HipHop album. With features from Exile, Nalu, JK, Joe Chibangu among other Zambian Music Pioneers at the time, Crisi$ set the foundation for what could be termed as an “underdog” genre 13 years ago.

2. The Business by Slapdee
Arguably this is the best Slapdee album up to date with Every Song deemed a masterpiece. The album earned the XYZ Founder 6 awards at the 2013/14 Zambian Music Awards. Other than the trophies, the album boosts amazing collaborations such as “Kokolapo” (ft Tommy D) and the Epic feature with legendary “Nasty D”.

3. Letter To Rhodesia by Eddie Black
This is the first album project by “Eddie Black” embended with an Urban Sound, Longevity. The “Duke Of Harzard” dives into the world of relationships, Dreams, vulnerability delivered with worthwhile bars and his catchy style. Although only a few might have paid attention to this project, it remains a masterpiece and a classic to this day.

4. The Genesis by SmaQ & Teliq
“The Genesis” is a collaborative album by rapper SmaQ & Teliq released in 2014. This project was a game changer and stirred controversy when it dropped. With a number of tough joints like Focus, Mambama and Street Disciple, the DJ Mzenga Man solely produced was a standout.

5. Amnesia by Chef 187
“Amnesia” still remains Chef 187‘s Best work so far with every song banging in the streets. Fused with sounds from other dormant local genres, Chef 187 provides a solid masterpiece with this project.

6. Art Is Tic by K.R.Y.T.I.C
Released late last year, “Art Is Tic” is arguably the best K.R.Y.T.I.C album so far. The So Good Entertainments delivered the best rap content album for the year 2019 on a more commercial scale.

7. RED by Tiye-P
This masterpiece is “Tiye-P’s first ever debut project after a longtime of making his way to the limelight. RED earned the rapper much more credit from his Critics especially after being underrated for a longtime. From the Album cover to the content, this album stands out as one of the most solid and creative Zed HipHop projects thus far.

One of a few Zambian albums to ever break out on the International scene was “The Business: Foreign Exchange” by Zone Fam. It earned the Most Successful Zambian HipHop group the recognition on the Continent and definitely set the bar high.

Giovanni is definitely an outstanding album and Jae Cash delivers and surpasses many’s expectation on this debut album. The K-Amy protégé dives into a lot of expects both personal life and careerwise on this project 70% produced by Big Bizzy.

K-Star, K.R.Y.T.I.C and Xsiq impress Zambian HipHop lovers with their clever bars, Delivery and all around rap charismas. Some stand out songs on this Classic tape include “Track 6”, Delele, About Last Night, Ubushimbe. The trio also infuse the project with some Humor which makes it overall entertaining to listen to.